Just added to your cart

Here's what some of our customers have to say

My son had an LDR Headgear for youth wrestling for a few years and I was very impressed with the product. So when I had a young man on my high school team who sustained a second concussion his junior year and I made the investment in an LDR for him as well. During his senior season he sustained a significant impact to the front of his head right in the padded area of the LDR. The match was stopped and he was checked for a concussion and cleared. I felt the LDR saved his senior season and made the decision to outfit my entire team with LDR head protection last year. After a full season of 12 wrestlers I am happy to report we did not miss a second of practice time or a single match to a head injury. Looking forward to our continued use of LDR!

5 stars, I had a child who has a concussion and was looking to get better headgear for my other son and seen these.  I had a few questions before I ordered the gentleman answered the phone and all my questions he also gave e a coupon code.  What great customer service. I'd really recommend this place.

Excellent Customer service and they stand by their products.  My son has been using his for a few years now.

Larry Marchionda thank you!~ We recommend your headgear all the time and have a number of our guys wearing it!

"Hello! I am a Family Practice PA in Manchester, IA (Go Hawks) and Mom a two little (ages 4 & 6 Wrestling boys). I wanted to say THANK YOU for developing such an amazing product. I recommend your headgear to all wrestlers and soccer players that step into my clinic. Do you offer any discounts for “bulk” orders? I’d be interested in presenting your headgear to our local school youth wrestling club to try and get more kiddos protected! Lucus Peters used to be a part of our club when he was just starting out and his mom was also my nurse for almost 5 years in my clinic. Thanks for your ingenious invention and consideration!"

"Larry-I got the LDR headgear today and I must say I am impressed! I am using my sophomore son as a test subject. The first thing he said when he put them on is "I can hear through these." Which is a benefit I hadn't expected? We followed the procedure to fit them to his head from the video and he said they are very snug and comfortable! We drilled a little with them on and he didn't have to readjust them-they were not moving on his head. Which is what I was hoping for. My wife who is not a wrestling fan - was thrilled at the extra protection as well and wondered why more headgear is not like the LDR.

We are going to a summer camp at MU starting tomorrow and he is going to take the headgear with him and further test them. I will let you know how it goes but my first impressions are very good! Thanks."

"This past weekend during the Iowa AAU State Tournament my 8th-grade son was dropped after the whistle off the mat head first onto the cement. He shook the cobwebs and came from behind to win. LDR protected my wrestler from what would have almost certainly been a concussion and probably a nasty head wound and even though less important maybe even 1 place lower on the podium. My son's love them and he will continue to wear there LDR in High school as well. Only thing I would like to see colour options guys? :) Great piece of safety equipment!"

"2 years out with a compound concussion. Back with confidence. Thanks, LDR."

"My brother in law purchased LDR headgear for both my wrestlers. They are easy to fit, comfortable and offer good protection for my boys."

"We recently purchased this headgear for our eight-year-old. I fully did not expect to get it in time for AAU States Tournament. We got it on Wednesday and he was able to practice in it and wear it to the Tournament. My son says it fits "Amazing"."

"My Son has used this headgear for the last two seasons and he loves it. I'm glad it protects his head better than anything else out there. I get heavy use and just broke, I called and left a message with them hoping to get a repair done and they took care of me. I had issues in the past with a chin cup breaking due to its size and they sent me several to try out. They stand behind their product and have excellent customer service. I highly recommend anyone giving them a try."

"My High School kid used to hit heads and get borderline concussions since he's been wearing this new headgear for the last 2 years, the head collisions don't hurt him anymore. Some kids are hesitant about trying a new style headgear, but if they were it, in a couple of weeks they end up loving it and won't go back to the earcups. I carry a backup pair so other kids can try, I would 100% recommend that everyone else try this!"

"My Jace ended up wearing one of these, and now he won't wear anything else!"

"It's awesome that this company is upgrading headgear for wrestlers!"

"This was the second camp this year I was able to coach kids to win the title at ISIteamcamp. Two weeks ago it was k-6 and this week it was k-8. I took a bunch of kids that didn't know each other along with coach Chris we were able to get these kids working as a real team and winning the whole thing. Thanks to Steve Farrell for putting on some greatly affordable camps for these kids. Also, want to thank LDR Larry Marchionda for developing a headgear that has been keeping my son (& many others) safer for a couple years now. Next Baby Max and I will head to camp in Illinois for the third leg of ISI camps. Also, note we had 6 kids win singlets counting Kyle Snyders USA singlet this week." 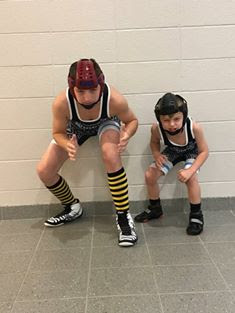 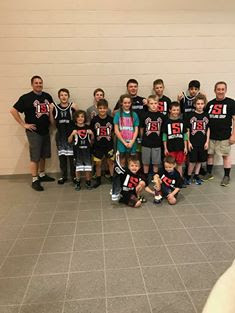 "He absolutely loves his headgear." 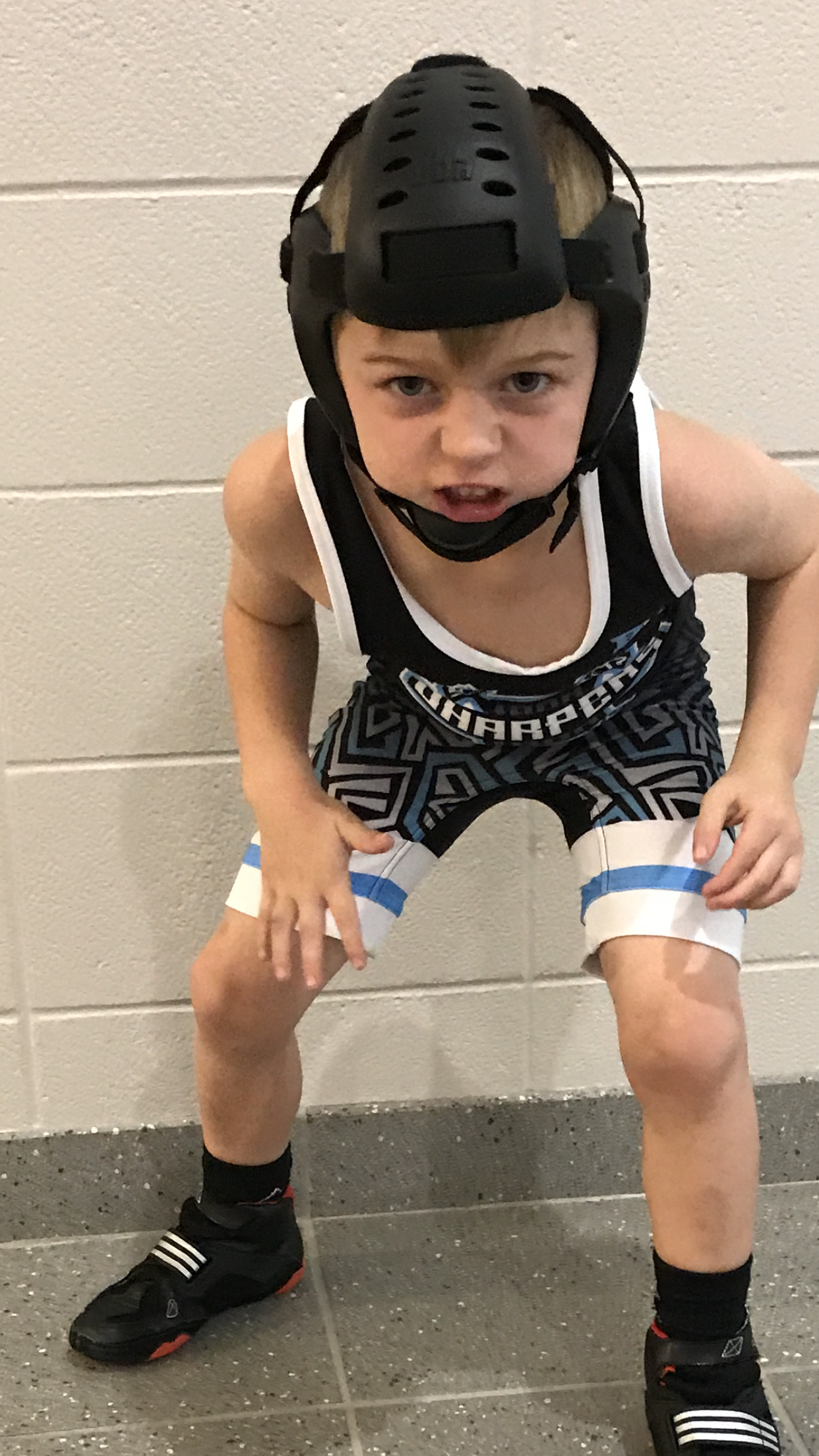 "This little stud muffin went 5-0 today with two pins against some of the best in the country beating state champions from Colorado, Illinois, and Michigan in the process. Couldn't be more proud of him, he wrestled the best I have ever seen from him." 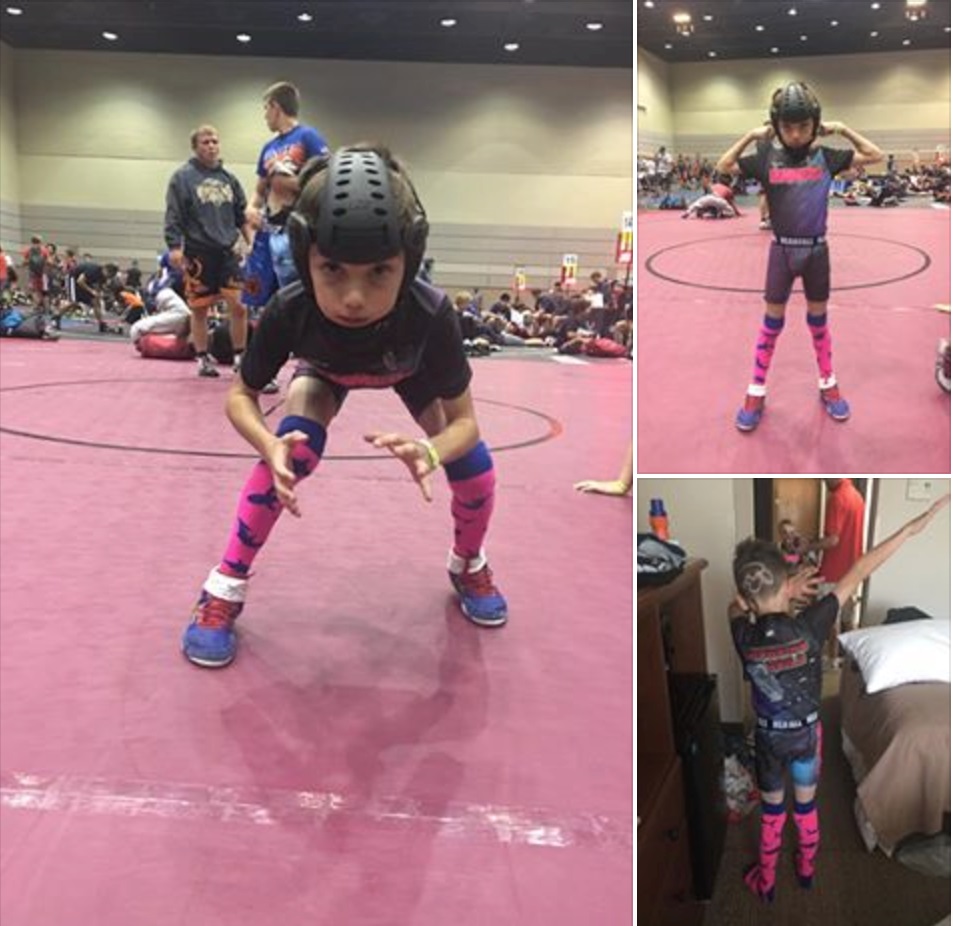 Click here to leave a review!
Use left/right arrows to navigate the slideshow or swipe left/right if using a mobile device